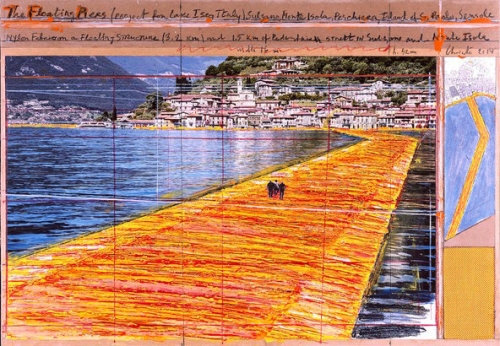 For just two weeks in June 2016, Christo and curator Germano Celant have announced that Christo will create an installation featuring floating walkways covered in bright yellow fabric, building a walkway around Lake Iseo, a lake in Italy's Lombardy region.

Titled The Floating Piers, the walkways will be constructed of about 200,000 floating cubes, which will stretch for almost two miles. The walkways will be both accessible to pedestrians—allowing them to literally walk on water—and visible from the mountain range above.

The walkways will also circle the island of Monte Isola, Italy's largest lake island, and the smaller San Paolo, before continuing into the mainland town of Sulzano. The two small islands have never been linked to the mainland before.

The 79-year-old artist is well-known for similar large-scale installations around the world that he initially collaborated on with his wife, Jeanne-Claude, who died in 2009. While the pair created several projects in Italy, The Floating Piers bears a closer resemblance to the 1983 work Surrounded Islands, which wrapped 11 small islets in Biscayne Bay, Miami in hot pink fabric that rested atop the water.

Christo raised about $11 million for the project, despite not knowing for sure what the final costs of installation will be. He also unsuccessfully attempted to pursue building it in Argentina and Japan.

During a press conference at MAXXI, Rome's contemporary art museum, he told the news agency ANSA that he anticipates the walkways "will be a very sexy experience, for the fabric follows the movement of the waves."

Christo has recently come under fire for a proposed project in Arkansas that some argue will be detrimental to the environment. However, much to the chagrin of local activists, a judge recently green-lighted the six-mile installation, saying that it complies with environmental regulations.