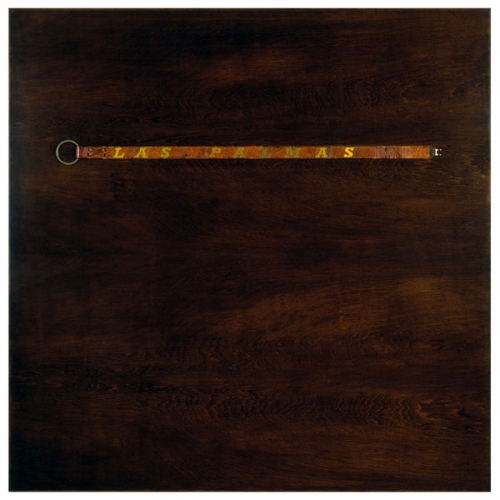 To be included in upcoming final Ed Ruscha Catalogue Raisonne

Text aside, Ruscha developed a vast body of work that approached silhouettes as subjects. In the mid-1980s Ruscha departed upon “a venture into strokeless painting.” While he admits, “I always detested airbrush art,” it was exactly this method through which he achieved paintings without the use of brushstrokes, which became known as his “Silhouette Paintings.” One such work, H.M.S. Nevertheless (2003), is an airbrush painting that served as the original for a series of prints created with the same composition. He popularized the ship motif in his 1983 photorealist work, Brave Men Run In My Family, a collaboration with fellow artist Nancy Reese; Reese painted the scene, Ruscha painted the lettering. The ship became a well-known, recurring image in many of his prints and paintings, particularly as is pictured here—a hazy shadow, tilted precariously, and disappearing into fog.

Another work, Las Palmas, consists of a leather belt, originally painted in 1967, with gold lettering, which was mounted upon a large, square wood panel. Something of an enigma, the belt most likely refers to the Las Palmas area of Fresno, California. The year it was painted Ruscha got married, was represented at the 9th São Paulo Biennial, and showed at the Annual Exhibition of Contemporary Painting at the Whitney Museum, the modern equivalent of which is the Whitney Biennial. Now, approaching five decades later, Ruscha is just as relevant as ever.