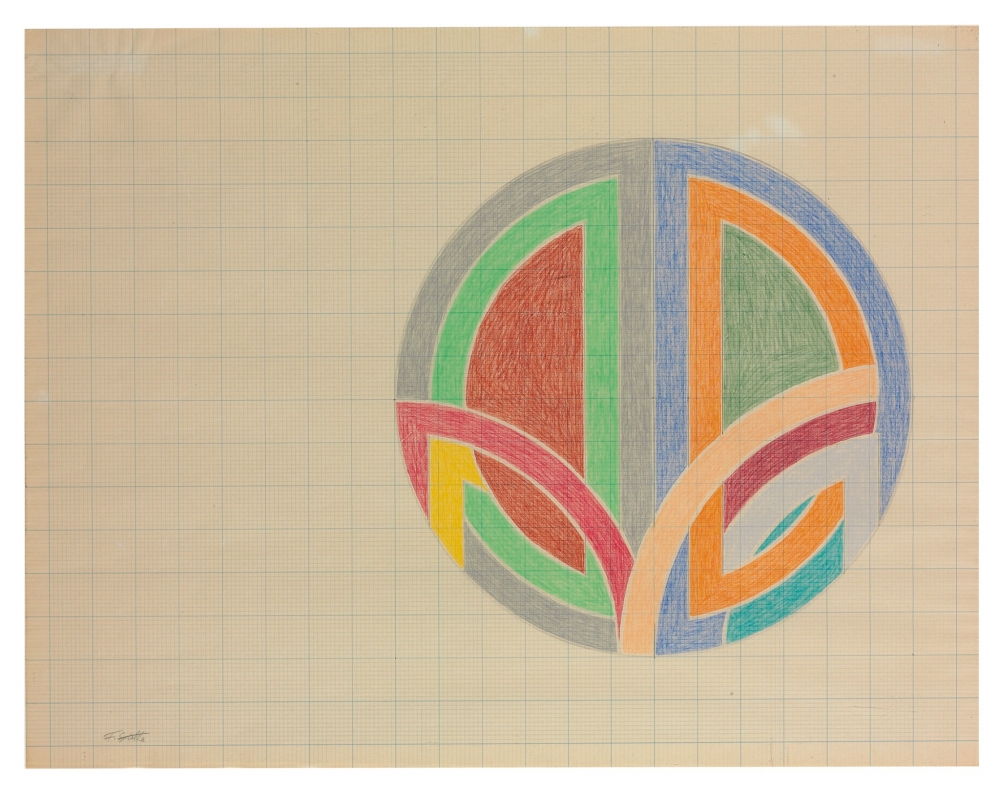 Now that the Whitney Museum of American Art has left its longtime digs on Madison Avenue for an all-new, terrace-laden building in Chelsea, its fall schedule seems likely to be read as a mission statement. What does it mean, for instance, that Frank Stella, 79, the champion of abstract art, has been tapped for the inaugural retrospective at the new building? Perhaps abstract painting is hot again, or perhaps the Whitney has entered a mature phase, celebrating not just the rise of art stars but the feat of staying artistically elevated over the years.

“It’s an accident,” Mr. Stella said recently, when asked about his show, which opens at the Whitney on Oct. 30 and was organized with the Modern Art Museum of Fort Worth. “I’m old. I’m not controversial anymore.”

Mr. Stella has done more than any other living artist to carry abstract art, the house style of modernism, into the postmodern era. Yet his passion for form, for contemplating weight and balance, has made him an outlier in an age of nutty auction prices and art that adopts the global economy as its very subject. By his own admission, Mr. Stella does not keep up with the current scene. “In all honesty,” he said, “I never got beyond Julian Schnabel and that generation. He was the ’80s, right?”

What does he think of Jeff Koons, whose shiny balloon dogs and other pop trophies made up the most recent retrospective at the Whitney? “You know what I always thought he was like? The Franklin Mint. He’s from Pennsylvania, and he outdid them. He outshone them! It’s for very wealthy people with no taste.”

Mr. Stella does confess to admiring at least one midcareer artist, Kara Walker, whose monumental sculpture of a sphinx-like deity was displayed to great acclaim in a former sugar factory in Brooklyn last year. “I saw it on YouTube,” he said. “I thought it was interesting.”

It was a weekday morning, and we were in his Volkswagen, zipping along an empty stretch of highway en route to his studio in the Hudson Valley. He lives in a townhouse in Greenwich Village and keeps an office there but commutes on weekdays to his studio in Rock Tavern, N.Y., about 60 miles north of the city. As he explained in his raspy, intense voice, “I was born to drive.”

I glanced at the speedometer and saw we were cruising at an uneventful 53 miles per hour. Mr. Stella, who misses nothing, volunteered that he hasn’t received a speeding ticket in “decades.” Still, his driving reputation precedes him. In the early 1980s, he made headlines after he pleaded guilty to a charge of driving 105 m.p.h. on the Taconic State Parkway. The judge let him off with a light regimen of community service, instructing him to give a few free public lectures about his art.

In those days, Mr. Stella’s much-publicized driving violations helped foster an image of him as a kind of artist-racer whose every gesture seemed accelerated. He was only 23 when he arrived in New York, straight out of Princeton, and produced his now-historic “Black Paintings,” a series of large-scale, austerely monastic canvases divided into right-angled patterns of horizontal and vertical stripes. They garnered enormous attention, much of it negative. As objects, the paintings were flat and screen-like, and critics saw them as a calculated affront to the sensual paint handling of Willem de Kooning, the Abstract Expressionist who was then the senior figure of the New York School.

Later, in art history textbooks, Mr. Stella would be acknowledged as a pioneering figure who pushed Abstract Expressionism into the shade and inaugurated the Minimalist movement of the ’60s. But as the years progressed and gallerygoers became accustomed to stumbling upon plexiglass boxes and stacks of red bricks by his colleagues, Mr. Stella went in the opposite direction.

His goal, he declared, was to imbue abstract art with the depth and density of old master paintings. He became the Master of the Shaped Canvas, abandoning the stable form of the rectangle to push the contours of his canvases into funky asymmetry. Each new phase of his work seemed to introduce an added quotient of pictorial drama, from the eye-warming “Copper Paintings” to the lopsided “Irregular Polygons” to the “Exotic Birds” of the mid-’70s, which pursued the exuberant gesture as assiduously as his early work renounced it.

The Whitney’s Stella show raises many deep questions, among them the fate of older artists in a society obsessed with novelty and “breakthroughs.” Mr. Stella originally proposed that the exhibition be limited to his more recent work. Critics of his generation are inclined to locate the apex of his achievements in his “Black Paintings” of the late 1950s and the works that immediately followed.  But to look at his more recent pieces — particularly the wiry, helium-light sculptures in his “Scarlatti Sonata Kirkpatrick” series — is to know that a reassessment is needed.

Departing from his usual role, Adam D. Weinberg, the director of the Whitney, will install the Stella retrospective in New York. He and Mr. Stella have been friends at least since the days when Mr. Weinberg was the director of the Addison Gallery of American Art, where Mr. Stella is an involved alumnus. “We have a very good relationship,” Mr. Weinberg said. “He pushes me, and I try to push him back.”

Indeed, Mr. Weinberg pushed very hard to persuade Mr. Stella that the show should cover his entire career. He won. The exhibition will go back to 1958, opening with paintings such as “East Broadway” and “Astoria,” sweet abstractions with fuzzy-edged stripes of yellow and black. They betray the influence of Jasper Johns’s paintings of American flags, which Mr. Stella saw at the Castelli Gallery when he was still at Princeton. “All of the painterly intensity was in the service of an organized geometry,” Mr. Stella said of Mr. Johns’s flags. “That made a big impression on me. The painterliness was already pre-ordered.”

By then we had arrived at his Rock Tavern studio, a massive, 40,000-square-foot warehouse that can fairly be described as underfurnished. There’s almost nowhere to sit, except for a battered lawn chair that serves as Mr. Stella’s throne. As he chomped on his Cuban cigar, he paid no attention to a bird that flew in, perhaps through a skylight.

The studio is in the same building as the Polich Tallix Fine Art Foundry, conveniently so. Photographs of Mr. Stella in an orange construction hat attest to his long, fertile history with the foundry; in the ’80s and ’90s, he turned out a body of shimmering, scrappy, jumbo-size abstract sculptures in aluminum and stainless steel. Some are too big to fit in his studio and are kept on a grassy field across the street, looming up like giant, silvery spacecraft that have landed in the middle of nowhere. The studio is packed with works spanning all phases of his career, and as we walked around, I was struck by the preponderance of undulating wave shapes lodged in his abstract forms. There were billowing sails turned upside down and inside out, and masts tilting at sharp angles. It seemed, for a moment, that the ocean was everywhere. Significantly, Mr. Stella, who always works in series, was consumed for years by his “Moby-Dick” series. He named each piece for one of the 135 chapters in Melville’s novel, which was panned by critics when it came out.

Wondering whether nautical references in his work have any basis in biography, I asked Mr. Stella if he enjoys the ocean. “We had a family house in Ipswich,” he replied, referring to a town north of Boston where he spent the summers of his childhood. “Ipswich is a real water place.” He grew up in a relatively well-to-do Italian-American family, in Malden, Mass. His father was a gynecologist, and his mother was an artistically inclined housewife who attended fashion school and later took up landscape painting. She signed her pictures Constance Stella and exhibited at the Malden Public Library. “They’re not bad,” Mr. Stella said of her landscapes. “She said she could do abstracts, too.”

He added brightly that his son Michael “is interested in it, and I think I am going to fix it up for him.” Michael, a radiologist living in Boston, is among Mr. Stella’s five children and the product of his first marriage to Barbara Rose, a prominent critic and art historian. Mr. Stella’s current wife, Harriet McGurk, is a pediatrician. Looking back on his sometimes chaotic personal life, he appeared relieved at how his children turned out. “I think it’s not a bad testament to the art world,” he said.

Lately, Mr. Stella has been making spindly and surprisingly lightweight sculptures, which will close the Whitney show. His Scarlatti pieces, shown last November at the Marianne Boesky Gallery in Chelsea, are named for Domenico Scarlatti, the 18th-century Italian composer who wrote sonatas for the harpsichord. Despite the musical titles, the sculptures can feel impressively gritty, like a bouquet of flowers run over by a car.

The Scarlatti pieces rely on the latest advances in digital fabrication. “I prepare the geometry and send it to the people with the machinery,” Mr. Stella said matter-of-factly. His assistants do the initial work on a desktop computer in his New York home office, with Mr. Stella directing from a chair. He has, at his disposal, an online library of ready-made shapes — the famous waves and smoke rings, the spiraling hat shape, the geometric star, all of which are lifted from his earlier work.

You can see his process as a form of efficient recycling. He emails his sketches to a 3-D printing company. The assorted parts come back to him in a bone-white, plasticlike resin.

A studio assistant is responsible for painting Mr. Stella’s work, though it has nothing to do with brushes. “The paint goes in a gun with a compressor,” Mr. Stella said, adding that he favors automotive paint of the kind used on racecars.

Mr. Stella’s penchant for computer design allies him with the hands-off strategies of many younger artists. Yet this subject does not interest Mr. Stella, who swears that computers have had no effect on the look or the formal content of his art.

Rather, he uses computers for the sake of convenience, he said. They allow him to sustain his inventiveness as he nears 80 and his physical strength diminishes. During the past six years, he said, both of his knees were exchanged for titanium implants. He has also had a hip replacement and “a couple of back operations.” Asked when he last picked up a paintbrush, he said it was probably in 2000, and explained: “It’s all about your body balance. I would fall over now trying to paint.”

Is something lost when the hand is subtracted from the process of art? Mr. Stella protested vigorously. “Yeah, but my hands are all over it!”

It was a puzzling comment. Perhaps he meant it metaphorically — hands as a symbol of the powers of the imagination. But I suspected he meant it literally. Even if he no longer paints, he uses his hands to help manipulate the coiling armatures of his sculptures. Moreover, he is still recycling shapes he drew by hand however many years ago, shapes that swim through his work like so many insistent memories. Memories of water, memories of de Kooning’s swooping, slipping brush strokes.

Mr. Stella could have been talking about himself when he told me, “De Kooning was once asked how he felt about celestial space” — the heavens, the stars, and all that. “He said he was only interested in the space he could reach with his hands.”