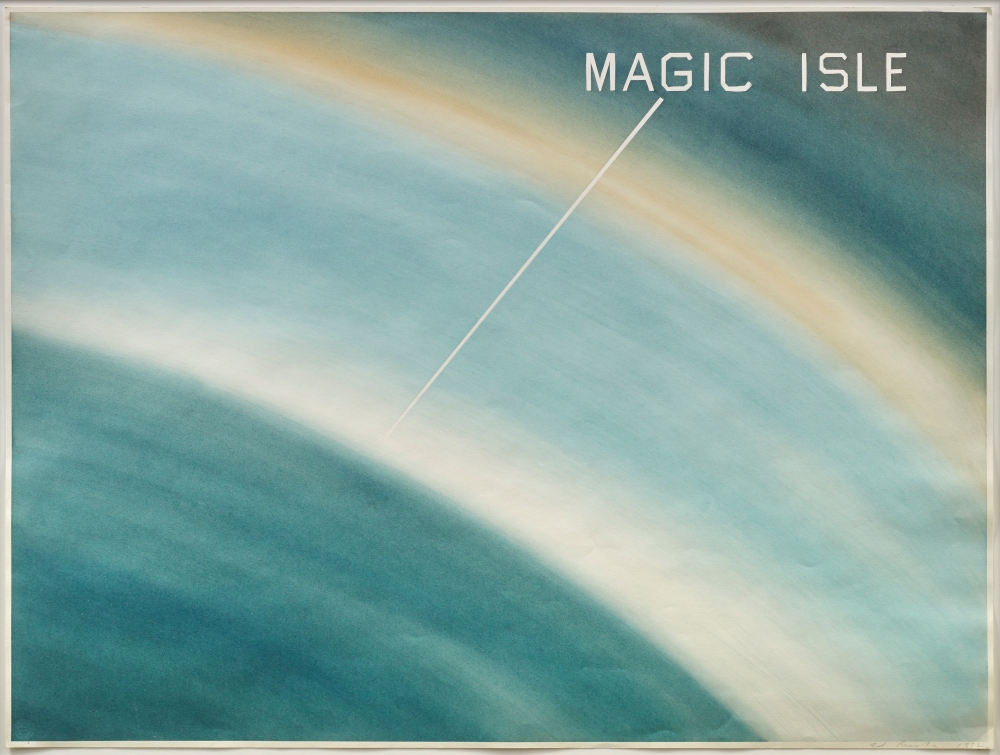 The hammer came down at $46 million to an anonymous bidder on the phone with Marc Porter, Christie’s chairman, Americas, after more than three minutes of bidding largely among three collectors on the phone with the auction house’s top specialists and an individual in the packed salesroom.

The iconic pop text painting—which achieved the highest result for a painting so far during New York’s fall auctions—had been in the collection of Los Angeles journalist and collector Joan Quinn and her late husband Jack since they bought it from the artist in the early 1970s. A Ruscha work last broke a record five years ago at Christie’s in New York when Smash, 1963, sold for $30.4 million, double its low estimate.

“We were bold on what we did, we heard a lot of criticism,” Alex Rotter, Christie’s chairman of post-war and contemporary art said at a press conference after the sale. With a nod to the fact the New York fall sales taking place this week didn’t feature some of the super big-ticket items of the last few seasons, Rotter added, “I wanted to prove that we [could] sell a painting over $50 million this season—I’m pleased with the result.”

Overall, the contemporary sale raised $325.3 million, including fees, with 89% of the lots sold. The total hammer price of the evening was 105% of the pre-sale low estimate, Guillame Cerutti said at the press conference, indicating the measure as a sign of a “solid, positive sale.”

Soon after the Ruscha result, David Hockney’s Sur la Terrasse, sold to an anonymous phone bidder at a hammer price of $25.75 million, which was $29.5 million with fees, after about four-and-a-half minutes of bidding that slowed to increments of $250,000. The work, estimated between $25 million and $45 million, was painted in 1971 as Hockney’s relationship with his lover and muse Peter Schlesinger unraveled. The nine-foot-tall painting had been in a private European collection, unseen to most of the public, since 1976.

Last November, Christie’s sold Hockney’s Portrait of an Artist (Pool with Two Figures), which also depicted Schlesinger in a work painted a year later, for $90.3 million.

“We knew this was an incredible picture, we knew this could move the market, and again, are blown away by an extraordinary result,” Ana Maria Celis, Christie’s head of evening sale for post-war and contemporary art, said after the sale.

Two artists whose work had never been sold at an evening auction also achieved records, with Alma Thomas ’ A Fantastic Sunset, 1970, fetching nearly $2.7 million, with fees, and Charles White's Banner for Willie J, 1976, achieving $1.2 million, with fees. Thomas’ previous auction record of $740,000 was achieved at Sotheby’s in May for Azaleas, 1969. White’s previous record was $509,000 for O Freedom, at Swann Galleries, achieved in April 2018.

Other highlights of the evening include the sale of Yves Klein’s Barbara (ANT 113), which fetched nearly $15.6 million, with fees, in line with pre-sale estimates, and the sale of Andy Warhol’s Muhammad Ali, from the collection of Richard L. Weisman, for $10 million, exceeding the $6 million high-end of the estimate range.