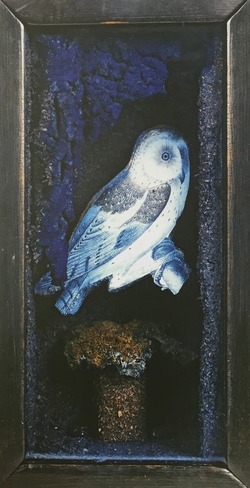 One of the most striking pieces in the exhibition dedicated to the late US artist Joseph Cornell, which is due to open at the Royal Academy of Arts in London this week (Wanderlust, 4 July-27 September), has been loaned by the leading US artist Jasper Johns.


The wooden box construction, Untitled (Owl Habitat), late 1940s, shows a ghostly print cutout of an owl perched above a bark slab. The piece reflects Cornell’s working patterns as he often assembled his objects during twilight hours, identifying with the nocturnal owl.


The critic Deborah Solomon writes in the Royal Academy magazine: “The box happens to have a distinguished provenance. I first stumbled upon it last summer when I visited the artist Jasper Johns Hon RA [Royal Academician] in his studio in north-west Connecticut. The box, he explained, was a birthday gift from Leo Castelli, who was his art dealer, and who perhaps recognised affinities between the work of Cornell and the much younger Johns: the appropriation of common objects, the melancholy symbolism.”

Cornell made a series of constructions from the mid-1940s dedicated to a variety of owl species, which ranged in scale, according to the exhibition catalogue. Some were embellished with blue-tinted glass and interior electric lights to “imitate the subdued yet intense palette of a moonlit evening”.

The show includes 80 of the New York-born artist’s assemblages, collages and films, along with box constructions filled with material obtained in New York’s thrift shops. It is divided in to four sections including “Play and Experiment” and “Collecting and Classification”. The exhibition travels to the Kunsthistorisches Museum in Vienna (20 October-10 January 2016).