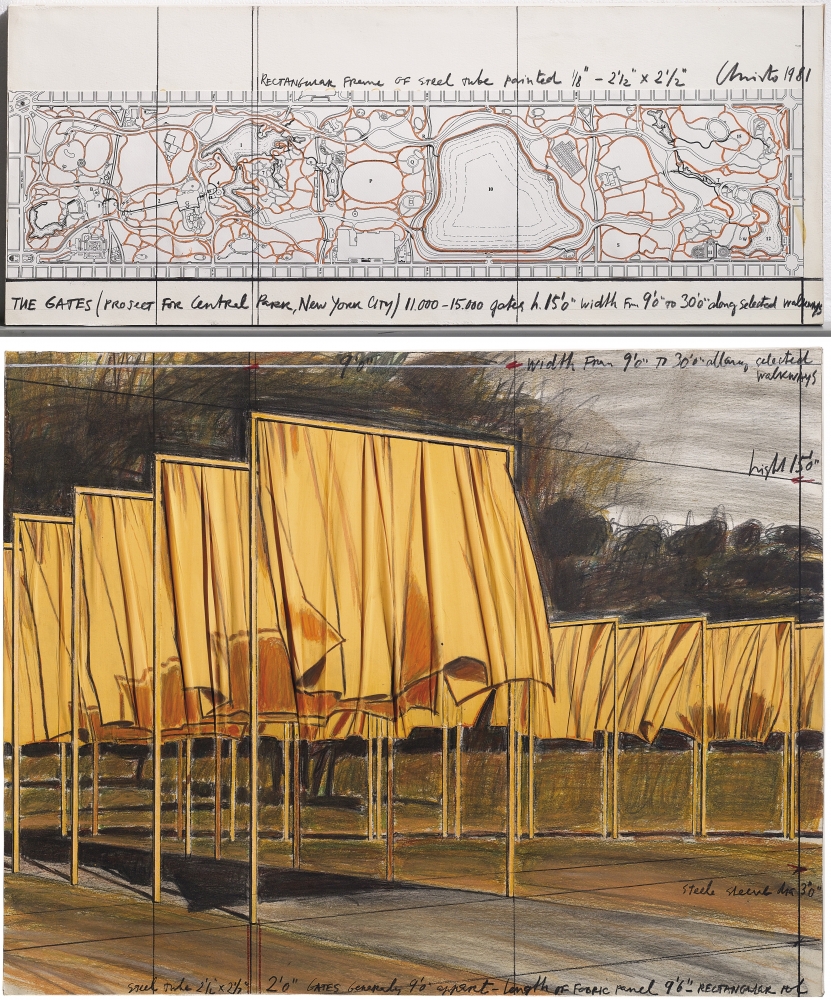 Signed and dated ‘Christo 1981’ upper right on the upper element

The French artist duo Christo and his late wife Jeanne-Claude, known for their epic site-specific installations, have long been beset by legal battles and environmental reports posing obstructions to their work. The pair are far from the first to catalyze charged debate over public art or Land Art; Richard Serra’s Tilted Arc (1981) went on trial in the ’80s, with major artists including Claes Oldenburg and Keith Haring coming to its defense before the structure was removed in 1989. As Christo continues fending off legal challenges to Over the River—a proposed project that would drape nearly six miles of Colorado’s Arkansas River in silvery fabric for two weeks in August 2015 (at the earliest), which has been in the works for some 20 years—the duo’s latest project is no exception.

For Christo, these conversations are as much a part of his practice as the finished projects, engaging community in debate about their environments and aiming to revitalize public space. “The identity of our project is built in the permitting process,” he has said. And the environmental impact reports that so often accompany Christo & Jeanne-Claude’s art come at the artists’ expense, as do the exorbitantly costly works themselves, which have been funded entirely through the sale of preparatory drawings and works by the artist duo.

One of our favorite historical works by Christo and Jeanne-Claude is Surrounding Islands (1983), for which the artists surrounded eleven islands in Miami’s Biscayne Bay with hot pink woven polypropylene fabric borders. It cost $3.1 million and, in addition to creating a visually stunning and ephemeral spectacle, is reported to have provided considerable environmental benefits to the region. Before the project launched, Christo and Jeanne-Claude’s workers removed, at the artists’ expense, 40 tons of garbage from the eleven islands (one of the islands had been previously dubbed “beer cans island”). At Casterline|Goodman Gallery, an artist rendering of the work features a hand-colored map and a sample of the material used, as well as handwritten notes by Christo, providing unique insight into the work.

Speaking about their artistic philosophy, Christo once said, “the important thing to understand is that all of our projects have a nomadic quality … they will be gone forever. And this quality is an essential part of all our work. They are airy—not heavy like stone, steel, or concrete blocks. They are passing through.” Playful and whimsical, Christo & Jeanne-Claude’s works invite us to see and imagine landscapes anew.