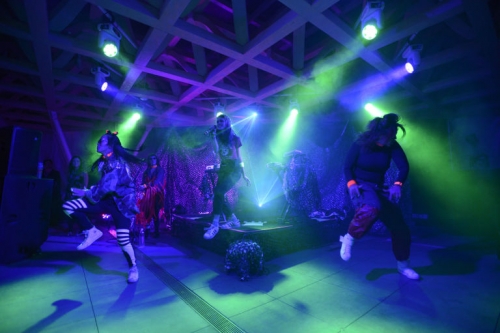 ASPEN — For fans of pop music, there was no better place to be in Colorado on Monday night than the Aspen Art Museum's The Now 2015 — even if many in attendance didn't realize it.

Formerly called Freestyle, The Now is the museum's annual extravagant winter party, a $1,500- to $5,000-per-ticket fundraiser celebrating the patrons that make  the noncollecting museum's existence possible. (The $45 million building and its day-to-day operations are funded entirely by private donations.)

The evening began with a lavish cocktail hour, complete with a caviar bar, a massive cheese table and stony-eyed models draped with brilliant, flowing dresses or swathed in fur like Siberian princesses. A comparatively spare soup and entrée dinner followed, capped with a curious dessert offering: Grimes.

That isn't French for some gold-flecked compote. Grimes is 27-year-old Claire Boucher, the experimental pop producer-singer whose fourth studio album, "Art Angels," broke into the top 10 of several highly touted music blogs' best-of lists this year. She's also a capable visual artist and painted the vivid pastiche of otaku and fantasy imagery that graces  her latest album's cover herself.

Boucher was recommended to the museum by Michael Goldberg, owner of Aspen's Belly Up, who sent the museum a list of 35 prospective artists. The list included a host of other up-and-coming female artists, such as enigmatic English singer-dancer FKA Twigs. But museum director Heidi Zuckerman insists that Grimes was the first choice. "We often show the work of artists before they become well-known, so it made sense that we'd pick Grimes and then she'd get all this acclaim," she said.

Still, few of the 250 in attendance knew anything about Boucher. From Casterline/Goodman Gallery co-owner Robert Casterline to fashion designer Dennis Basso, most were there to support the museum rather than cut a rug. "We've never heard of her," said event planner Christina Moorhead, who accompanied estate planner Sacha Beriro to the party. "This whole thing is more of a spectator sport for us." Even with his  well-documented rapport with musicians, Gov. John Hickenlooper departed before the night's musical dessert after delivering a brief, apolitical speech. Dozens of others followed suit.

The cultural divide raised a troubling 21st-century thought experiment: If one of pop's most promising up-and-coming artists plays an exclusive set for a handful of disinterested art patrons, does anyone Instagram it? But the museum had anticipated this issue, setting aside an extra 50 tickets at $500 apiece for those who wanted to see only the concert.

Whether the asking price was worth the 45-minute, 10-song set or not, they sold out in short order. The paying party crashers swept in after dinner, and swiftly reduced the average age of the event by about half. One group of six friends traveled all the way from Mexico to Aspen for the show and, of course, some skiing. (When in Rome.) "I think she is going to amaze people," said Danny Rodriguez, a 25-year-old copywriter from Mexico City among the group. "I hope she doesn't behave just because she's in Aspen."

Boucher routinely performs for thousands, but despite reports of altitude sickness, she met the 100-odd in attendance with the manic energy of an over-wound toy. After all had filed onto the museum's covered roof, she sprang up to the stage, her tiny frame frantically cranking nobs on her rig to queue up  "Laughing and not Being Normal," the baroque opener of "Art Angels." Decked out in a thrift-store jeans and a tight T-shirt with a tangle of purple-dipped blonde hair, she could be mistaken for a trendy pizza delivery girl were she not on stage.

From there, Grimes clung fast to the poppiest songs in her arsenal with two exceptions: the inclusion of "Scream" — which features Mandarin rapping, a chorus of bloodcurdling shrieks and a Russian poem intro in its live iteration — and the exclusion of "Flesh Without Blood," the de facto hit single of "Art Angels." For a museum flush with challenging exhibitions, it was an unusually predictable set.

While the front of the crowd was a shoulder-to-shoulder dance party, the majority of the room watched silently from the back, some seated, enjoying the show with the wry curiosity with which they might view a piece of performance art. (Visual artist Tom Sachs could be seen scurrying from the back to the front, where he sat in rapt attention for most of the show.) If only a footnote on the evening, Grimes was another minutely curated display for the Aspen Art Museum: Exciting, substantial and very much of the moment.