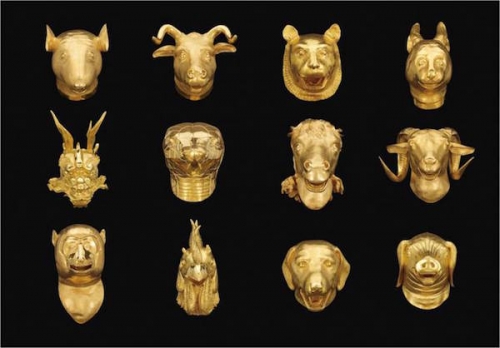 The sale marked a new record for the artist at auction. Ai's top sale was previously $1.2 million, set by his Map of China at Sotheby's Hong Kong in June 2014.

Our source tells us that art collector, adviser, and purported art flipper Stefan Simchowitz (see Is Stefan Simchowitz a Blessing or a Nightmare?)served as Parker's adviser on the sale. When we reached out to him for confirmation, he responded to our query, via e-mail, with: "?"

The gold-plated statues are each 28-inches tall, and depict the Chinese zodiac signs. The piece is based on a set of 18th century sculptures created by Jesuits for a fountain clock in Beijing's Summer Palace that was later looted, and references China's history of copying and cultural repatriation.

The sculpture is the seventh in a series of eight, and was originally shown in 2011 at Paul Kasmin Gallery in New York, where it carried a sticker price of just $1.8 million.

The dramatically higher cost at auction can be partially attributed to the sale of some of the other editions, which drove up the value, but Parker also isn't shy about spending his estimated $2.7 billion fortune. In 2013, the entrepreneur, played by Justin Timberlake in The Social Network, came under fire for his $10 million Lord of the Rings–themed wedding, which caused environmental damage to a campsite in Big Sur California. (Parker paid $2.5 million in penalties following the event.)

Several Zodiac Heads editions, including two artists proofs, are currently engaged in a world tour with recent stops at the Cleveland Museum of Art, and the Museo Nacional de Antropología in Mexico City. One version is currently on view at Chicago's Alder Planetarium, where each head has been hooded in protest of China's lack of human rights, and the artist's continued persecution (see Ai Weiwei's Zodiac Heads Kept Under Wraps in Chicago).