Specializing in post-war and contemporary art, the Casterline|Goodman Gallery in Aspen shows first-tier original artworks from the 20th and 21st centuries, including original paintings, sculptures and drawings by established artists such as Jean-Michel Basquiat, Alexander Calder, Ed Ruscha and Andy Warhol.

For the summer season, the Casterline|Goodman Gallery will feature the artist Mark Acetelliwith his show: La Davinafrom August 5, 2018 to September 16, 2018.

Mark Acetelli was born in Detroit into an artistic household. Mark’s mother herself was a painter and some of his earliest memories were the smell of turpentine and oil paints. Growing up surrounded by his mothers work, she inspired and encouraged him to become an artist.

Mark’s paintings exist to awaken your sense of exploration and adventure demand a new discovery. A chemistry of complexity and spontaneity, lyrical abstraction of frenzied marks, many of which previously lay hidden, buried beneath strong layers of self-taught - expression. Those truths, first obscured and then obvious, aim to engage the viewer, allowing them to explore their own interpretation.

Mark’s paintings are inspired by the intensely personal introspective journey of life, from the ever-changing complexities of love, loss, birth and death. The context of his work he describes as, "Absence and Presence” pertaining to how someone or something can be physically gone, but the essence still remains. Capturing the physical mixed with spirituality on canvas. His application of paint is an extension of that thought process. Continuously building up and tearing down, layer upon layer, adding and subtracting; a visceral dance between the conscious and the unconscious, until the emotion is expressed.

Mark’s paintings may be going through multiple incarnations with the past lying just beneath the surface, adding to its overall dimension and depth. In his work Mark seeks to evoke a feeling rather than depict a defined image. He uses primarily oils and encaustics to create thickly layered canvases with emotive bursts of color. Creating a world where imagination and reality come together. Mark’s works can be found in many private and corporate collections around the world including, Bill Withers, Lisa Colburn, "Colburn School of Music" Raytheon Corp, Universal Studios, Warner Bothers, Michael Jordan, Stuart Beattie, Claire Forlani, Camryn Mainhiem and Francine Maisler. 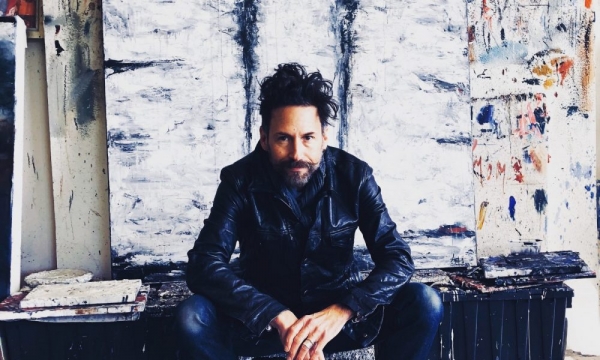