Oil on canvas board

Casterline|Goodman is proud to present The Katz Meow the early works of Alex Katz from June 27, 2014 to July 27, 2014. The gallery will hold a reception July 3rd from 6-8pm for the final month of the show and also in celebration of the July Fourth weekend.

The Casterline|Goodman Gallery has put forth ten years of collecting a fine selection of Alex Katz’s early portraits, landscapes, and flowers dating from 1966 to 1993. Katz has always been known for his unique, naturalistic style that made him stand out amongst his contemporaries, who were following the trend of Abstract painting.

While studying at the Skowhegan School of Painting and Sculpture in Maine, Katz became consumed by nature. Every year following, Katz would travel from his loft in SoHo to his 19th century farmhouse in Maine to work. During this time, Jackson Pollock was creating his first all-over drip paintings, which greatly inspired Katz. He believed this method mirrored the freedom and spontaneity of nature, and began a series of all-over tree paintings. This style also affected his landscape and flower paintings, which have been described as “environments that viewers can immerse themselves in”. Katz strongly believes in painting from life and has said that natural light is the only way to achieve a subject’s true color. His style has been described as “bold simplicity”, and the flatness of his objects and use of bright color earned him fame and the Pop artist title. Casterline|Goodman’s collection features Katz’s Tan Woods, Tiger Lily, Red Roses, Lily 1, and Pink Petunia #2.

Katz’s other focus is portraiture, and learned by using his friends and family as subjects. Although Katz has admitted to destroying many early canvases, he stayed committed to his own style and perfected his method over time; aiming to capture snaps-shots of life in idealized settings. One of the highlights of Casterline|Goodman’s show, is a vibrate painting of his wife Ada, Orange Hat #1 (1973). Ada has been an inspiration over the course of his career and has been the subject of over 250 works. Another important piece on display is Impala (Study) (1968), which has an impressive exhibition history of the Whitney Museum of American Art and the Jewish Museum. 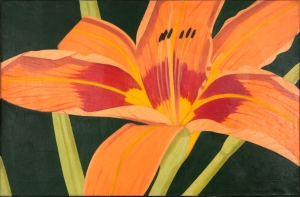 Alex Katz has partnered with Barneys and Art Production Fund to produce a capsule collection featuring everything from a water bottle to a limited edition portfolio. Katz has also created a custom mural, which is installed in the windows of Barneys in New York City to promote the collection. The 60 foot wide mural depicts Yvonne Force Villareal, Doreen Remen, Casey Fremont, Elizabeth McAvoy and of course, his wife Ada. 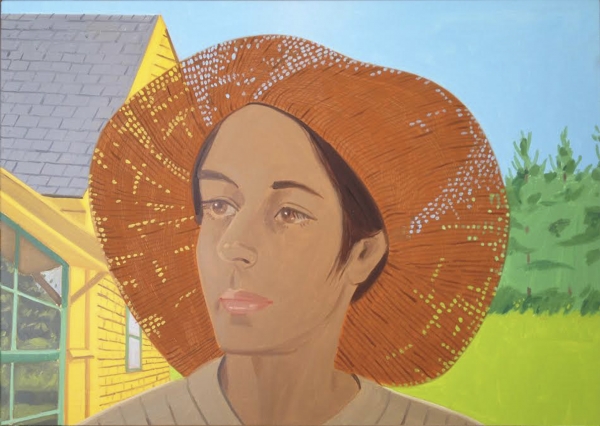 Why Alex Katz's Exhibition in Aspen is "The Katz Meow"

One might call Alex Katz a modern Mannerist. Eschewing the “holy trinity” of “content, form, and subject” extolled by his American contemporaries in the 1950s and ’60s, the New York-born artist shunned the expressionistic abstractions, exaggerated Pop compositions, and spare, Minimalist assemblages pursued by the likes of Jackson Pollock, Roy Lichtenstein, and Donald Judd, and instead pioneered a distinct formal style that favored understated drama over naturalism while reviving the art of figuration, from portraiture to landscape painting. Marked by smooth, flat surfaces, hazy-eyed subjects with seemingly airbrushed skin, and sun-dappled domestic backgrounds, Katz’s distinctive paintings embodied an unsettling yet saccharine sort of Americana.