Marilyn Minter is an American Contemporary artist best-known for her sexually-inspired works. While she was studying at the University of Florida, she created a series of black-and-white photographs after her drug-addicted mother. She was praised for her work and later ventured into hyperrealist, brightly colored photographs centered around glamour and beauty.

After completing her MFA at Syracuse University, Minter moved to New York and became involved in the local nightclub scene. Inspired by club life, she photographed close-up shots of lips, heels, glitter, pearls and body parts. Her style is known for being erotic, pornographic, and at times even grotesque. Minter often stages her photo shoots with film and then uses unconventional darkroom processes to reach her desired effect without digitally manipulating them. Meanwhile, her canvases are done by combining negatives with the use of Photoshop to create an entirely new image. She has also experimented in short films, and her film “Green Pink Caviar” was on view in the Museum of Contemporary Art, New York (MoMA) from 2009-2010. Minter currently teaches in the MFA department at the School of Visual Arts in New York City.

Marilyn Minter has work featured in the permanent collections of San Francisco MoMA, the MCA in San Diego, the Whitney Museum of American Art in New York, the Blanton Museum of Fine Arts in Austin, the MoMA in New York, the MFA in Boston, the Kunsthaus Museum in Zurich, the Denver Art Museum, the Baltimore Museum of Art and the Solomon R. Guggenheim Museum in New York. 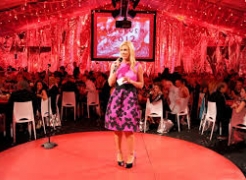