David Hockney is widely-known as the most influential British artist. He is renowned for his large-scale bright, semi-abstract paintings. Hockney graduated from the Royal College of Art in London in 1962 and was given his first solo exhibition in 1963. In 1964, he moved to California, where he further developed his artistic style and drew inspiration from his new environment. Though he implores vibrant colors in his work, Hockney’s realistic portraits and landscapes recall French Impressionism.

Hockney proves his artistic versatility through almost every media, including stage design and technology. Despite his age, Hockney welcomes the use of the iPad, which he uses for all of his drawing purposes. "What fascinates me is not just technology but the technology of picture-making," says Hockney. "I spend more time painting, of course, but I treat the iPad as a serious tool. The iPad is influencing the paintings now with its boldness and speed." The de Young Museum in San Francisco presented a collection of Hockney’s 400 iPad drawings in 2013.

David Hockney was a founding member of the MCA, Los Angeles in 1979. His 12-foot long acrylic Beverly Hills Housewife(1966-1967) sold for a record $7.9 million at Christie’s in 2008. In 2012, the artist founded the David Hockney Foundation. Through the foundation, Hockney plans to give away his paintings to galleries as the LACMA or the Tate in London. 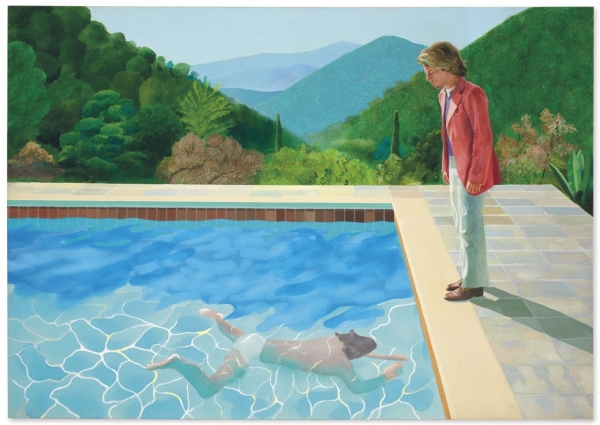 A David Hockney painting of a man in a pink jacket overlooking a sun-dappled swimming pool sold for $90.3 million at Christie’s in New York on Thursday—setting a record for a living artist at auction.